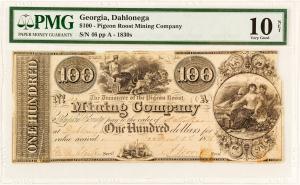 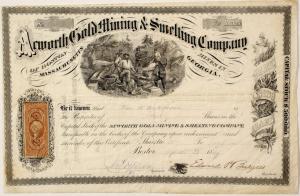 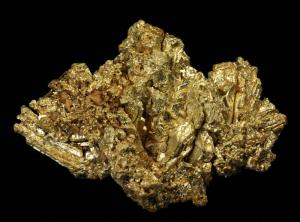 The Gold Rush sale will be nothing short of phenomenal. Many fine collections will be sold, but the headliner will surely be the Al Adams collection of mostly Georgia and North Carolina artifacts.”
— Fred Holabird

For those unable to attend the auction live, internet bidding will be facilitated by iCollector.com, Invaluable.com, eBay Live and Auctionzip.com. Phone and absentee bids will also be accepted.

“The Gold Rush sale will be nothing short of phenomenal,” said Fred Holabird, president and owner of Holabird Western Americana Collections, LLC. “Many fine collections will be sold, but the headliner will surely be the Al Adams collection. Mr. Adams’s specialty is an area few people even know about – the Georgia and North Carolina gold rushes of 1799 thru the 1840s.”

Gold rushes in Georgia and North Carolina? Yes, they happened, and many years before the far more famous California Gold Rush of 1848-1855. It began with the discovery of a single gold nugget in North Carolina in 1799. Nearly three decades passed before truly substantive gold discoveries were made in North Carolina and Georgia, all by men with no training in mining.

The Al Adams collection includes the first gold company stock certificate from 1807; an 1830 letter from a Georgia bank to the US Mint, asking what to do with all the gold coming in; gold lottery tickets for Georgia land; Georgia Gold Rush land deeds with medals, rarely seen by collectors; a Pigeon Roost Mining Company scrip collection (1835-1838); Georgia and North Carolina gold coins; Georgia gold nuggets; American gold specimens; and US Mint documents.

Other items will include a superb Belfast Mining Company scrip collection from the 1830s; gold bullion receipts from Dahlonega, Charlotte, San Francisco, Carson City, New Orleans and the Philadelphia Mint; Gold Rush-era private assayer bullion receipts from seven Western states; and the finest-ever offering of 1840s, 1850s and 1860s mining company stock certificates from the Appalachian gold belt in the east to the three Western states of California, Nevada and Colorado.

The world in which the Georgia and North Carolina gold rushes took root and flourished is hard to imagine in today’s modern time. The U.S. had only recently been formed, and the first coins minted, when that first gold nugget was found in North Carolina in 1799. There were only 16 states in 1800. The number crept up to 24 states by 1821 and remained that way for 15 years.

Development outside the original 13 colonies was slow. The areas south and west of New England were called the “Western frontier”, populated mostly by Native Americans and ex-pats from Western Europe looking for adventure and a better life. Most were farmers and merchants. The scientists remained in Western Europe. Very little was known about geology at the time.

Indeed, the first geologic map was printed in Europe in 1799 and it would be 25-30 years before anything similar was produced in America. That’s what makes the Georgia and North Carolina gold rushes so remarkable. They were forged with no prior mining know-how. Not a single man in the Georgia-North Carolina gold rush had been a miner. It was American ingenuity at its best.

There is much more to the auction than just the Al Adams collection. Also offered will be hundreds of mining artifacts, including many collected from Georgia mines, plus a fantastic numismatic library, inclusive of many rarities. The other major collections include the following:

• Robert Bennett, the highly regarded mining geologist who spent much of his 45-year career working the Goldfield district. He collected high-grade ore specimens from many major mines he was lucky enough to work for. These are dutifully included in the sale.
• Jerry Gray, a longtime collector of gold and turquoise specimens from Carson City, Nev.
• Vern Potter, a national ephemera dealer who’s now retired but his massive collection of Gold Rush-era exchanges, important maps and special documents will be in the auction.
• Robert Fulton, the late collector of rare mining books and former head of the University of Nevada (Reno) in the 1920s. Another collection, similarly themed, has an inscribed Sutro Tunnel book to Melville Atwood from Charles D. Poston (the “Father of Arizona”).

The mining stock certificate collections in the auction “are among the best we’ve ever offered,” Mr. Holabird said. “They include four major collections, including the Laguna Collection of rare Arizona stocks, part of a major Nevada Territorial collection, early California and Bodie collections, antique firearms and rare Tahoe gaming chips.”

Color catalogs are available on request, by calling 1-844-492-2766, or 775-851-1859. Also, anyone owning a collection that might fit into a Holabird Western Americana Collections, LLC auction is encouraged to get in touch. The firm travels extensively throughout the U.S., to pick up collections. Last year it went to Boston, Florida, Seattle and New York, among other places.