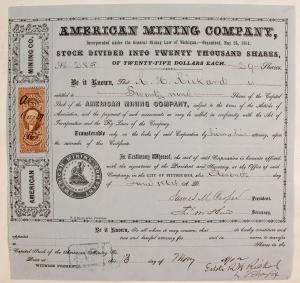 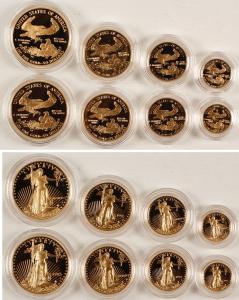 It was Holabird Western Americana Collections’ Cornucopia of Collectibles Auction, held October 18th through 22nd, online and at Holabird’s gallery in Reno.

This sale marked the start of an exciting fall and winter season for us. We will be offering a number of fantastic major collections.”
— Fred Holabird

Online bidding was facilitated by iCollector.com, Invaluable.com and eBay Live. Just a handful of people attended the sale in person, but 3,776 registered bidders participated online. “This sale marked the start of an exciting fall and winter season for us,” said Fred Holabird of Holabird Western Americana Collections. “We will be offering a number of fantastic major collections.”

All the Michigan mining stocks have interesting back-stories. The certificate issued in 1885 to Jacob Pierce, for 34 shares, was from the Pewabic Mining Company, first operating in 1853. The underground copper mine initially focused on opening prehistoric pits that traced an amygdaloid bed. It didn’t yield much, but the company did manage to pay dividends of $1 million before allowing its mining charter to lapse in 1884, when it shut down. The certificate brought $2,250.

The sale’s top-selling mining stock actually came out of California. It was a certificate issued in 1863 by the Bodie Bluff Consolidated Mining Company (Aurora, Mono County), for 25 shares, to W.P. Coleman ($5,500). Interest in the certificate was boosted by the fact that it contained the signature of California Governor Leland Stanford (as well as company secretary F.K. Bechtel).

Another stock certificate signed by Stanford – but not as governor but as company president – was the one issued in 1863 in the amount of 50 shares to Sylvester Byron, from the Governor Stanford Gold and Silver Mining Company ($3,375). Leland Stanford was a tycoon as well as a politician. The stock doesn’t commit to either California or Nevada, as the mine straddled both.

Railroad certificates included one from the Silverton Railroad Company (Denver, Colo.), issued in 1893 for 10 shares (at $100 per share) to C.M. Hobbs and signed by company president Otto Mears ($2,750); and bond specimen #0000 for the South Pacific Coast Railway in California, for a $1,000 first mortgage 4 percent gold bearer bond, with image of George Washington ($3,375).

A star lot from Day 1 was a beautiful, flint glass Old Tea Cup Whiskey bar back bottle (San Francisco, Nev.), from the 1880s ($1,875). The 11-inch-tall bottle, a rare and interesting relic from the Old West, had a fluted neck and shoulder area and 12-paneled body with refired pontil. The words “Old / Tea Cup / Whiskey” were embossed in script, with slanting white enamel.

Gold lots did particularly well on Day 2. Top achievers included a pair of sets of American Eagle gold bullion coins, from 1991 and 1992, with each set containing four coins and in the original government packaging ($5,423); a Copper Block Buffet gold nugget token from Valdez, Alaska ($2,000); and two 1978 gold Krugerrand dies, each one ounce designed by Paul Kruger ($1,563).

Anyone owning a collection that might fit into an upcoming Holabird Western Americana Collections auction is encouraged to get in touch. The firm travels extensively throughout the U.S., to see and pick up collections. Last year it visited many cities throughout the country.