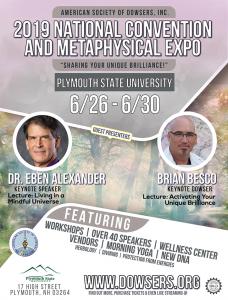 Want to know more about dowsing? 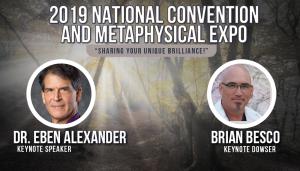 Since 1961, ASD has been a pioneer for scientific & technical exploration of dowsing, as well as the esoteric, spiritual and psychic arts in the United States

In recent interview by Elise Loehnen in New York, while Karen Newell and I were guest presenters at Gwyneth Paltrow’s in Goop Health event, we were able to crystallize the main points of our message”
— Dr. Eben Alexander

PLYMOUTH, NH, USA, May 21, 2019 /EINPresswire.com/ — Since 1961, The American Society of Dowsers (ASD) has been a pioneer for scientific and technical exploration of dowsing, as well as the esoteric, spiritual and psychic arts in the United States. ASD’s annual convention will feature keynote speakers Brian Besco and Dr. Eben Alexander with Karen Newell as well as over 20 speaker presentations on dowsing, healing, medicine and more.

PLYMOUTH, NH, May 14, 2019 – The American Society of Dowsers is hosting their 59th Annual Conference on June 26-30, 2019 in Plymouth State University in Plymouth, New Hampshire. This is the National Dowsing Convention & Metaphysical Expo and Annual Members Meeting. The 59th Annual Convention will feature Keynote Dowser Brian Besco and Keynote Speakers Dr. Eben Alexander with Karen Newell. Brian Besco will be presenting Newly Discovered Ancient Alien Artifacts of Jalisco, Mexico and Dr. Eben Alexander with Karen Newell will be presenting Living in a Mindful Universe. There will also be over 40 speakers, workshops, vendor areas, morning yoga sessions, a wellness center and a new dna labyrinth.

Brian Besco is an energy worker, healer, author, researcher and Master Builder of higher consciousness energy tools. As a gifted seer and energy worker, Brian is world-renowned for his soul-level planetary-ascension work. Brian is considered the world leader in tensor technology and has based his research furthering the work of Slim Spurling, the inventor and pioneer of tensor technology. Brian is the owner of Twisted Sage studios, a manufacturing facility in Black Hills, Dakota. Twisted Sage Studios specializes in leading-edge energy tools that are used in clearing, connecting, activating and healing. One of TwistedSage’s top products is the tensor ring, which is a cooper ring with a crystalline structure that creates a one-way piezoelectric energy flow. Brian is the author of The Harmony Handbook: And Multidimensional Primer – a manuel on advanced energy work including creating your Sacred Circle and connecting soul to soul. Brian is also a co-creator of the Ascension Chamber, a structure that was created to raise one’s vibration. Brian’s presentation Ancient Alien Artifacts of Jalisco, Mexico includes a video journey through the ancient artifacts of Mexico. One of these artifacts include 9,000-year-old tablets depicting Egyptian and Mayan deities as well as a 30,000-year-old tablet that depicts the story of destroyed planets, UFO’s, and the procreation of new races. Brian will be presenting his theory that these artifacts belong to the greater Atlantan Civilization, which includes the Mayan and pre-Egyptian heritages.

Dr. Eben Alexander is an academic neurosurgeon with over 25 years of experience, including 15 years at Brigham and Women’s Hospital, Children’s Hospital, and Harvard Medical School in Boston. When a form of bacterial meningo-encephalitis left him in a coma, Dr. Eben experienced his memories disappearing and his thoughts and emotions shutting down. While he was in a coma, Dr. Eben went on a journey into another realm. After recovering from the near-death experience, Dr. Eben shared his story with the world in his book Proof of Heaven: A Neurosurgeon’s Journey into the Afterlife. Dr. Eben has also authored Seeking Heaven: Sound Journeys Into The Beyond, The Map Of Heaven: How Science, Religion, and Ordinary People Are Proving the Afterlife, and Living In A Mindful Universe: A Neurosurgeon’s Journey into the Heart of Consciousness, co-written by Karen Newell. Karen Newell is co-founder of Sacred Acoustics and co-author of Living A Mindful Universe with Dr. Eben Alexander. Keynote speakers Dr. Eben Alexander and Karen Newell will be presenting Living in a Mindful Universe, based on their book by the same name. This lecture focuses on what we know about the brain, mind, and consciousness and what the true nature of consciousness is. Dr. Eben and Karen will instruct how to tap into the mind and heart for healing, relationships, creativity, guidance and more.

About The American Society of Dowsers (ASD): ASD is a nonprofit 501(c)(3) organization founded in Vermont in 1961 to disseminate knowledge of dowsing (water witching, the discovery of lost articles or persons, and related para-psychological phenomena), development of its skills, and recognition for its achievements. Its mission is “to support, encourage and promote dowsing and dowsers in a manner consistent with the highest standards of personal integrity and behavior; to provide dowsing education and training to dowsers and non-dowsers alike to bring them to a level of proficiency they are comfortable with; to promote and foster communication and fellowship among all persons in any way interested in dowsing.” For more information on ASD, our conventions, and membership go to www.dowsers.org