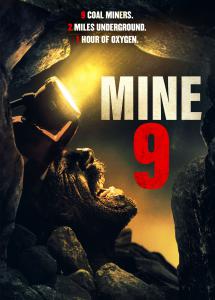 Coal mining is a dangerous business and Mine 9 gives you an up-close look at just how real and dangerous it can be when safety concerns are ignored, and warnings fall on deaf ears”
— Writer, director, producer and a native West Virginian Eddie Mensore

The film from director/producer Eddie Mensore has a 93% “fresh” score on RottenTomatoes.com on both its critics and audience score rankings, with excellent reviews from Variety, the Los Angeles Times, RogerEbert.com, the New Orleans Times-Picayune, the National Post, the San Jose Mercury News and many others.

MINE 9 is also available on many leading digital platforms including Comcast, Cox, Spectrum, iTunes, GooglePlay and Amazon.

MINE 9 is being released by 123 Go Films and distributed by Alliance/Distribution Solutions. The heart-stopping story of tragedy, terror, and survival, inspired by true events, follows nine Appalachian coal miners trapped two miles underground after a methane explosion. With only an hour’s supply of oxygen, the race is on to escape alive.

MINE 9 employed a very unique targeted theatrical opening strategy in spring 2019, playing to dozens of sold-out theaters in the heart of coal mining country, selling over a quarter of a million dollars at the box office before opening in New York City, Los Angeles and other major markets nationwide.

Writer, director, and producer Eddie Mensore, a native West Virginian, says that “in Appalachia, coal mining towns are filled with brave men and women who risk their lives every day to put food on their families' tables. Everyone knows the risk, everyone knows the danger, and everyone hopes their loved one comes home alive. Coal mining is a dangerous business and Mine 9 gives you an up-close look at just how real and dangerous it can be when safety concerns are ignored, and warnings fall on deaf ears.”

Distribution Solutions, a division of Alliance Entertainment, is the largest aggregator and downstream distributor of independent film labels in North America.