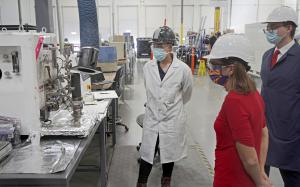 Photo cutline: Urbix has been enjoying visits from esteemed guests like US Senator Martha McSally, shown here during a recent visit. She is learning about Urbix’s innovative high-yield CSPG process. Commercial versions of CSPG equipment are currently on o

Urbix Resources positioned to capitalize on the coming EV boom

Arizona companies like Urbix Resources in Mesa are leading the way with graphite purification technology that is cleaner and cheaper than its competitors.”
— US Senator Martha McSally

MESA, AZ, UNITED STATES, September 8, 2020 /EINPresswire.com/ — The electric vehicle market is booming. Though different agencies report varying numbers, everyone agrees: in a world where a threatened environment and shrinking resources are increasingly on everyone’s mind, there is no direction for the market for electric vehicles to go but up.

The weather reports for EVs are overwhelmingly optimistic. For instance, professional forecasters Markets and Markets tell us that in 2019, there were about 3,269,671 EVs worldwide. They are predicting 26,951,318 units by 2030. That’s huge growth. But all of those vehicles need battery power. And all of those batteries require graphite to get their charge. But where does that graphite come from? And how does it get from the ground into a form that can power an EV? It won’t surprise you to learn that there is more than one answer. And some of those answers are better than others.

With their beginnings in graphite mining and the early development of pristine graphene, Mesa, Arizona-based Urbix Resources is today the frontrunner in American development of specialized anode graphite of the type electric vehicles require. In the current market, Coated Spherical Graphite, known as CSPG, is mainly sourced from China. The Chinese product is sometimes questionably sourced and always produced using methods that are far from the green ideal consumers are imagining when they buy their electric car.

The method of graphite purification Urbix has perfected and are currently using to produce CSPG at their pilot plant uses award-winning green methods. It makes Urbix-purified graphite the most environmentally friendly anywhere. The company reports that it expects to be able to provide 10 percent of US requirements for CSPG by 2023, and 30 percent by 2025. Commercial equipment is currently on order with an anticipated delivery date during Q2 2021. The output from this equipment will represent over $400 million in CSPG sales.

The Urbix pilot plant in Arizona is just the beginning. With CSPG capacity of 40 metric tonnes per year, Urbix is the largest truly American natural producer of coated spherical graphite in the United States. Existing joint venture and licensing agreements will see international markets engaged for follow on development of blue print and boilerplate plants. Ongoing discussions with American, Japanese, and South Korean collaborators as well as key supply chain interests in Mozambique, Madagascar, Tanzania, Norway and Brazil will allow Urbix to participate at the forefront of the worldwide evolution of electric vehicles.

Technological advancements developed by Urbix are making these dynamic international relationships possible. At present, a variety of off-take, equity, and debt solutions to support the growth necessary to meet the coming demand are being reviewed. An intense financial growth plan is being rolled out before year’s end to accommodate the technical and commercial rollout.