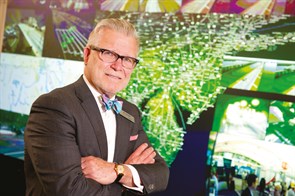 “David brings tremendous depth of knowledge since he has worked with both the major display and content control aspects of mission critical spaces.”
— Chad Kickbush, General Manager AV and VR Business Unit

MARSHALLTOWN, IOWA, UNITED STATES, October 13, 2020 /EINPresswire.com/ — Mechdyne Corporation’s Audio Visual and Virtual Reality business unit is pleased to announce the addition of David Jones to our team in the role of Business Development, Mission Critical Control Rooms. David started his professional audio visual career in 1986. His focus on control rooms started in 1990 so he brings three decades of knowledge and experience to Mechdyne. Currently working from his office in Rochester, MN, David will be the primary interface for the Operational Control Room users, partners and a resource to consultants designing facilities and infrastructure for these critical applications.

“David brings tremendous depth of knowledge since he has worked with both the major display and content control aspects of mission critical spaces, said Chad Kickbush, General Manager of Mechdyne’s Audio Visual and Virtual Reality business unit. David has also worked on the component and integration sides of the business having worked with major industry players such as Barco, Mitsubishi, GraphX Wall, as well as several integration partners. David added, “I have been involved in the deployment of over 500 mission critical control rooms over my career so far. There has been a great mix of Federal to Local Government projects, utilities, oil and gas, process control, network operations, and security operations. The future of these control rooms will involve technologies that Mechdyne has decades of experience with; virtual and augmented reality and intuitive interface methodologies. I am eager to bring new technology to mission critical control.”

David is extensively involved in industry associations. He is currently a member of the American Institute of Architects (AIA), International Society of Automation (ISA), ITS America & various state ITS Chapters (ITSA), Society of American Military Engineers (SAME), and the 7/24 Exchange.