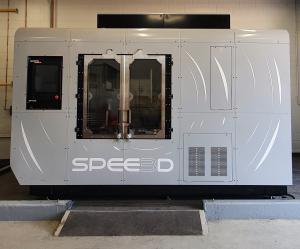 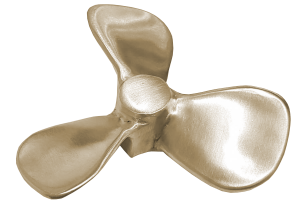 Following an award-winning trail with the Australian Army, the Royal Australian Navy has installed its own WarpSPEE3D metal printer at HMAS Coonawarra, Darwin.

Having the capability to produce high-quality metal parts on-demand, in the field or at sea will be ground-breaking for the Australian Defence Force.”
— Byron Kennedy, SPEE3D CEO

Following an award-winning metal printing trail with the Australian Army, the Royal Australian Navy has installed its own WarpSPEE3D metal printer at HMAS Coonawarra, Darwin.

A large-format SPEE3D metal 3D printer was installed by the Fleet Support Unit (FSU) at HMAS Coonawarra Navy Port this week, making the Royal Australian Navy the latest Australian Defence service with the capability to print their own metal parts, on-demand.

Sustainment, or the repair, maintenance and overhaul of equipment makes up a substantial proportion of the cost of all Defence Forces globally. The difficulty and expense of getting spare parts through regular supply chains have been exacerbated and highlighted by the COVID-19 pandemic. The world has been looking to advanced manufacturing (AM) to solve this problem, however, most AM technology has proven too delicate, too expensive, and far too slow to solve the problem. SPEE3D has proven to be the exception.

SPEE3D recently completed a series of successful field trials deploying the WarpSPEE3D printer to the remote outback with the Australian Army. The Australian Government funded the $1.5 million trial which included the training of Army craftsmen and engineers in 3D printing at Charles Darwin University in everything from design to certification of parts. The program resulted in a range of parts that the Army are now able to print and finish in the field at a fraction of the cost and time of current supply chains. The pilot program with the Royal Australian Navy is expected to produce similar results.

The installation of a WarpSPEE3D at HMAS Coonawarra was made possible after the Australian Government made $1.5 million investment in a similar 18-month pilot of the capability for the Royal Australian Navy. This world-first trial is designed to streamline the maintenance of patrol vessels and significantly increase parts available to the Navy compared to those available from regular supply chains. This technology empowers the Navy to design and manufacture the parts they require, when and where they are needed, whether that be on base or at sea.

SPEE3D CEO Byron Kennedy said: “We are excited to be working with The Royal Australian Navy on this programme. Having the capability to produce high-quality metal parts on-demand, in the field or at sea will be ground-breaking for the Australian Defence Force.”

More information on SPEE3D’s work with the Australian Defence Force, including video and case studies are available at www.spee3d.com.

SPEE3D, based in Darwin and Melbourne, Australia, is an innovative supplier of metal-based additive manufacturing technology. SPEE3D focuses on the development, assembly, and distribution of machines and integrated system solutions based on the patented cold-spray technology. The products enable significantly faster, lower-cost, and more scalable production than traditional metal printing techniques for copper and aluminium.