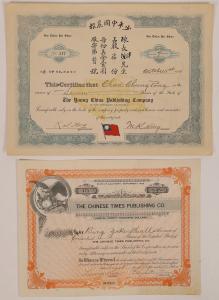 Pair of Chinese publishing company stock certificates from the 1920s, one for the Young China Publishing Co. (San Francisco) and the other for the Chinese Times Publishing Co. ($2,125). 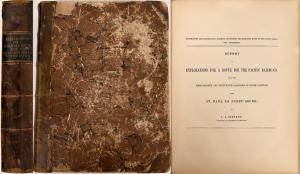 Important, monumental 12-volume railroad survey report published from 1855-1860, compiled to determine the best rail route from the Mississippi River to the Pacific Ocean ($3,125). 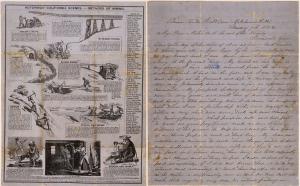 Letter-sheet from 1856 illustrating all the major types of gold mining done in California by 1855, published by James M. Hutchings and titled Methods of Mining, with twelve vignettes ($3,500). 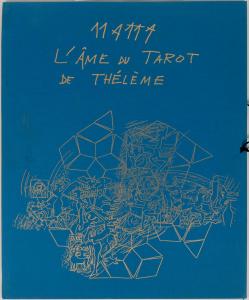 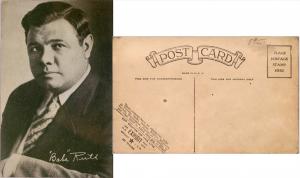 Nice and rare postcard photograph of baseball legend Babe Ruth, wearing a suit and striking a reflective pose. The 1920s-era postcard was clean, unused and not a reproduction ($1,188).

The auction was packed with hundreds of lots of mining collectibles, philatelic material, Americana and more, and featured a number of important collections.

RENO, NV, UNITED STATES, January 4, 2021 /EINPresswire.com/ — A portfolio of five aquatint etchings by the Chilean artist Sebastiàn Matta sold for $3,750, a pictorial letter-sheet from 1856 illustrating all the major types of gold mining done in California by 1855 brought $3,500, a monumental 12-volume railroad survey report published from 1855-1860 compiled to find the best rail route to the Pacific coast realized $3,125, and a pair of Chinese publishing company stock certificates from the 1920s fetched $2,125 at a five-day Holiday Auction held December 17th-21st by Holabird Western Americana Collections, LLC.

The auction was held live in the Holabird gallery at 3355 Airway Drive (Ste. 308) in Reno, as well as online via iCollector.com, LiveAuctioneers.com, Invaluable.com and Auctionzip.com. The sale was packed with hundreds of lots of mining collectibles, philatelic material, Americana and more and featured a number of important collections in a wide range of collecting categories.

“Within the Prag collection were some fantastic sub-collections,” said Fred Holabird of Holabird Western Americana Collections, LLC. “Among these were Ken’s banking collection, American entertainment, brewing, telephone and telegraph, turnpikes, firearms, printing and publishing collections. A few categories are so big they’ll be split between this sale and an early 2021 sale.”

The 12-volume railway report, titled Reports of Explorations and Surveys to Ascertain the Most Practicable and Economical Route for a Railroad from the Mississippi River to the Pacific Ocean (1855-1860) was a Day 2 hit and is inarguably one of the most important historical works about the U.S. government’s development of the West, as hastened by the California Gold Rush.

An 1865 letterhead for the Kenyon Mining Company (Black Hawk, Colo.), on which a letter has been written and signed by “S.H. Buttrick” and is addressed to “My Dear Colonel”, together with a stereoview with great depth and superb content, went for $1,125. Also, a stock certificate from the World’s Columbian Exposition, a world's fair held in Chicago in 1893 to celebrate the 400th anniversary of Christopher Columbus' arrival in the New World, for 50 shares, finished at $625.

A check dated Oct. 24, 1879 from the Boise, Idaho branch of the Northwest Stage Company, regarding operations in Utah, Idaho, Washington, Nevada and Oregon, in the amount of $36.20, signed by John Hailey (Genl. Supt.), made $610. Also, a Native American $5 silver certificate, Series of 1899, the only issue of U.S. paper money for which a Native American was selected as the central feature, with a bust of Ta-to-ka-in-yan-ka of the Oncpapa Sioux tribe, rose to $343.

Two popular 1860 Smith and Hartmann (Miller, N.Y.) brass trotting horse medals, both having an obverse of an Indian head left with “United States of America” and “1860” below, and similar trotting horse depictions on the reverse, earned $687; while a group of five railroad passes from the Pacific Northwest Railroad, spanning the years 1904-1932, including Puget Sound Electric Railway, Pacific Coast RR Co., and the Northwestern Pacific RR Co., changed hands for $312.

The letter-sheet from 1856 illustrating all the major types of gold mining done in California by 1855 was published by James M. Hutchings and titled Methods of Mining. It contained twelve vignettes, four done by Charles Christian Nahl, a prominent California Gold Rush-era artist. Each one depicted a different method of mining. Included in the lot was a three-page letter dated Jan. 7, 1856, by miner George W. Wilson, to his family in Nashville, headed Buena Vista Hill.

An attractive group of 37 postcards featuring lifestyle images of the Piute (Paiute) and Washo (Washoe) people (infants in cradleboards, elders, women at work, a man on horseback, more), along with images of a camp in Fallon, Nevada, achieved $1,875. Also, two Pacific Express Co. paid covers with horse and rider pictorials, both out of Sacramento circa 1856, one addressed to R.W. Brush (a weak strike) and the other to Charles E. Hinkley (a strong strike), realized $625.

Day 4 contained 733 lots of art, Native Americana, firearms and military, sports (including postcards, stocks and cards), and Part 1 of bargains and dealer specials, including numismatics, stocks and bonds (mining, railroad and other categories, and mining equipment and ephemera).

The portfolio of five aquatint etchings by the Chilean architect and painter Roberto Sebastiàn Antonio Matta Echaurren (1911-2002), better known as Sebastiàn, was titled L'ame du Tarot de Theleme (1994). It was portfolio no. 92 from an edition of 100, unframed. Matta was heavily influenced by Dalí and Yves Tanguy, and was an important figure in the evolution of Surrealism.
Other top lots from Day 4 included the following:

• A Joslyn model 1855 percussion carbine rifle, .54 caliber, known as the “monkey tail” carbine and rarely seen today. This example, wearing 160 years of handling marks, was said to have been used by McClelland “Clell” Miller of the James Gang. It hit $1,875.
• A nice and rare postcard photograph of baseball legend Babe Ruth, wearing a suit and striking a reflective pose. The 1920s-era postcard is in clean, unused shape and is not a reproduction. It came out of the collection of Mr. Ken Prag and hammered for $1,188.
• A Paiute-Shoshone basket woven in the 1920s by the renowned Native American basket weaver Dat So La Lee of the Washoe Tribe in northern Nevada. She sold many of her finest works at The Emporium in Carson City, Nevada. This fine example sold for $594.

The final day of the sale, December 21st, was a continuation of bargains and dealer specials – 680 lots, led by 29 lots of transportation and the rest general Americana, to include toys, cowboy, souvenir plates, music memorabilia, jewelry, books, foreign, geographic sort and miscellaneous.
Holabird Western Americana Collections is always in the hunt for new and major collections to bring to market. It prides itself as being a major source for selling Americana at the best prices obtainable, having sold more than any other similar company in the past decade alone. The firm will have its entire sales database online soon, at no cost – nearly 200,00 lots sold since 2014.
To consign a single piece or a collection, you may call Fred Holabird at 775-851-1859 or 844-492-2766; or, you can send an e-mail to fredholabird@gmail.com. To learn more about Holabird Western Americana Collections, LLC, visit www.holabirdamericana.com