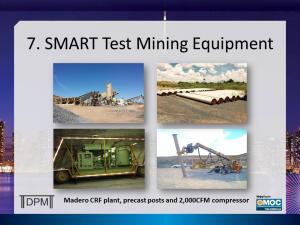 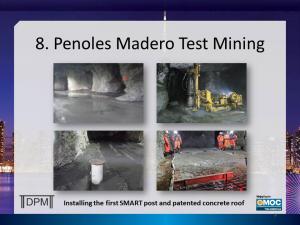 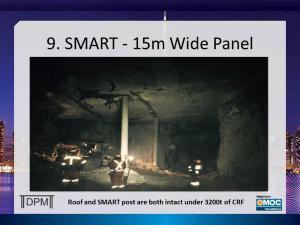 Penoles Test mining proved that 4 SMART cells can be opened up under 3200 tons of CRF without causing post or roof failure. This mine proves the SMART platform.

TORONTO, ONTARIO, CANADA, April 27, 2021 /EINPresswire.com/ — DPM #3. DPM Mining Inc is pleased to announce a key patent has been issued, Canadian patent No. 2853584, which allows the creation of a new SMART mining method. SMART coverts mining of an orebody to a set of linked spreadsheets using 1,000t cells rather than a series of stopes and pillars. Accurately cost mining a single SMART cell, the geological block modelling program then calculates the LOM NPV. This simplified SMART approach generates at least 40 mining, financial, productivity, research, and safety solutions vs other mining methods.

In 2010, Armando Sanchez the Director of Mines of Penoles, had his mining engineers research the world for a new mining platform that had the potential to improve mining productivity. DPM mining was the only stoping system identified. Penoles has operated 10 mines, several railroads plus smelters for the past 150 years. Penoles used modern software, equipment, and mining methods but productivity was still dropping. DPM was introduced to Penoles and Armando Sanchez decided to fund a $5,000,000 feasibitity – test mining program using Wardrop. The first step was the Golder FLAC 3D modeling program.

A Golder FLAC 3D model of car parkade sized, 360,000t orebody was built. The computer model mined the equivalent of an 8 cell x 8 cell spreadsheet x 6 lifts high, using 10 different strengths or types of backfill. The model was rerun after every 4m long round, recalculating post loading and movement, 3D CRF load changes, tensile loading of floor steel and posts, plus shear loading of the concrete roof near the posts. Snapshots of all loads were taken every 15 minutes for analysis. See DPM #1 and #2 EIN Press Releases for SMART mining innovation and Golder CRF modelling details.

The Golder FLAC 3D Modeling gave the engineering parameters required to design a “proof of concept” test mine. The overall SMART design is that individual 6 lifts of CRF are designed to be self supporting. The posts and roof have already moved and stabilized before the next lower lift goes through a new backfill cycle. The heaviest post loads are always in the 1st SMART lift. See Images 7, 8, and 9.

1. Standard 6% binder rock fill (500MPa CRF) when jammed in place had the right balance of flexure vs strength to self support when confined by a continuous concrete roof, supported by posts plus friction along perimeter stope walls.
2. The CEMEX lab testwork of the Penoles hard limestone achieved 500Mpa strength with 6% cement. However, the only aggregate that was available at Madero was surface clay oxidized limestone. It took 8% cement to achieve the 500MPa strength and flexure. A 150m3 per hour CRF plant was designed that could also manufacture concrete and shotcrete. Post forms were designed and built.
3. The FLAC 3D model calculated that the concrete roof sags 50mm on the 1st SMART lift, reducing to 30mm by the 3rd lift. Similarly, post loading reduced from 250t to 150t by the 3rd lift then loads steady state. Post design required 8, 25 mm rebar welded to 12mm thick steel flanges to allow posts to be bolted together.
4. Three different post lengths are required; 6.3m for primary posts, 5.4m for filler posts and a 3rd post 5.65m long that is only required on the 1st SMART lift below the top cut. A second set of instrumentation posts were also caste. These have a conduit pathway for safe fiber optic cabling to load cells, plus video and Wi Fi etc. to individual production panels.
5. Primary posts are designed to compress to match the backfill – roof sag or posts will crush. Compression pads were loaded from 0 to 400t at the CANMET lab in Ottawa. A single pad compressed 25mm at 200t and 50mm at 400t loading thus 2 pads were stacked and bolted to the bottom flange of each primary posts.
6. DPM retained Cubex (Sandvik) in Winnipeg to manufacture an ITH drill that could drill .4m diameter by 6m deep post holes. A 3,000 CFM booster compressor was used to lift the cuttings, post holes were drilled in 2-3 hours. Posts and the 250mm thick concrete roofs were not damaged by blasting.
7. The toughest item to design was the reinforcing steel in the concrete floor/roof. A US civil consulting engineer who had experience designing both concrete bridge decks and deep sewer trenches provided the solution. His design required 18” overlapping sheets of 6” x 6” x 1/2” welded steel mesh in the main part of SMART cell with a double layer only required near the post location.

A total of 31 posts were installed via 6m x 6m top cut drifts. The roof perimeter was supported by 25mm steel hanging rods installed at 1m centers. An initial 100m of 6m x 6m drifting was done on the 1st SMART lift to get miners comfortable with drifting under a concrete roof, then drifting beyond the roof edge. A 15m wide panel was then slashed exposing a single post supporting 4 SMART cells or 3200t of CRF. Penoles test mining was totally successful, the roof and posts stayed intact.

Rather than keeping the patented SMART technology confidential, 10 EIN press releases will be issued to explain SMART to both the mining and financial community. To quantify some of the 40 SMART platform advantages, 4 well known mines will be re designed using the SMART mining platform. Interested parties can contact DPM mining for more details.