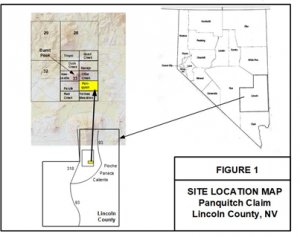 — Panguitch Claim is Located in Lincoln County, Nevada in the United States —

NEWBURY PARK, CALIFORNIA, UNITED STATES, April 27, 2021 /EINPresswire.com/ — Dignity Gold, LLC, (“Dignity Gold”) is pleased to provide additional details on the first precious metals mine that will back the DIGau digital token to be issued by its wholly owned subsidiary Dignity Corp.

The mine is known as the Panguitch Claim (“Panguitch”) and is one of ten contiguous claims located on Burnt Peak in Lincoln County, Nevada. Panguitch covers an area of 80 acres and contains an estimated 15.5 million cubic yards of alluvial placer deposits. According to an NI 43-101 report prepared for the property, the claim contains an estimated 6.4 million recoverable ounces of gold. Additionally, the same report identifies approximately 74 million ounces of recoverable silver and 50 million ounces of recoverable platinum as well as commercially significant amounts of palladium, rhodium and iridium.

As previously announced, the DIGau token will be backed by a minimum of $6 billion in gold reserves pledged to Dignity Gold under deeds of trust and a pledge and security agreement. On March 26, 2021 this amount was set at 3,442,144 ounces of gold reserves. If the price of gold goes down additional ounces will be pledged, and if the price of gold rises, the dollar amount of the backing for DIGau will follow.

Dignity Corp. through its partnership with broker-dealer, Tritaurian Capital, Incorporated, member FINRA and SIPC, plan to issue the DIGau token as soon as possible in accordance and compliance with United States securities laws.

Founded in 2019 by Stephen Braverman and Kent Swig, Dignity Gold is the parent company of Dignity Corp. which intends to issue the Dignity token using the ticker DIGau backed by gold deposits located in the United States.

Tritaurian is a registered broker-dealer and member of FINRA and SIPC. Tritaurian's FINRA record is available at on FINRA BrokerCheck. Tritaurian is the first non-ATS broker-dealer to be approved for a license to sell digital private placement securities using distributed ledger technology, otherwise known as blockchain technology. Digital securities are an emerging, yet rapidly evolving, implementation of distributed ledger technology with the potential to increase access for investors and decrease cost for issuers. Tritaurian believes that blockchain-based securities improve transparency, increase security and streamline regulatory compliance through the open and programmable nature of blockchain tokens.