Watercore – WATER AND WASTEWATER TREATMENT AND PURIFICATION FOR BUSINESSES 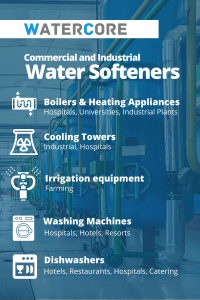 EDGECLIFF, NSW, AUSTRALIA, July 26, 2021 /EINPresswire.com/ — Hardness in water is the sum of the concentrations of Calcium and Magnesium. Other ions produce hardness too: Iron, Manganese, Strontium, Barium, Zinc, and Aluminum, however these ions are generally not present in significant quantities and are not included when measuring water hardness.

Hardness is generally expressed in units of milligrams per liter (mg/L) as Calcium Carbonate (CaCO3). An expression also used to define hardness in the context of ion-exchange water softeners is grains per gallon (1 grain per gallon of hardness is equal to 17.1 mg/L as CaCO3).

Carbonates and Sulphates of Calcium and Magnesium tend to precipitate as hard deposits on the surfaces of pipes and heat exchanging surfaces. As a result, the resulting build-up of cement-like scale tends to restrict the water flow inside the pipes. In boilers, for example, the deposits act as an insulation that impairs the flow of heat into water, reducing the heating efficiency and allowing the metal boiler components to overheat. In cooling towers, these precipitates are responsible for a decrease in airflow through the tower and if not corrected, can seriously reduce the tower’s performance.

In general, most commercial and industrial plants such as boilers, cooling towers, car washes, laundries etc need soft water. As a result, water softeners are common in the treatment of surface and well water supplies for these industries.

Watercore design, manufacture and service industrial and commercial water softeners using two different water treatment plants:
ION-EXCHANGE RESIN FILTER: Resin or ion exchange water treatment replaces Calcium and Magnesium ions with Sodium. Basically the incoming water passes through a resin filter and the resin ‘traps’ the Calcium ions, or limescale, from the solution and exchanges them for ions of sodium. As Sodium has a higher solubility than Calcium or Magnesium in water, this exercise translates into higher water quality.

MEMBRANE / NANOFILTRATION SYSTEMS: In contrast to the ion exchange softeners, Nanofiltration softeners use low-pressure Nanofiltration membranes, similar to reverse osmosis membranes, to remove bivalent ions from water. As a rule of thumbs these type of commercial and industrial water softening membranes reject 99.8% of sulfate and bivalent ions while passing other components, particularly monovalent ions such as Chloride and Sodium, allowing for ultra-low-pressure operations.

Choosing and sizing and the best water softener will depend on a number of factors including hardness of the water, volumes of water used, flow rate required and type of application. However our technical sales team are available to help you with all aspects of design, from the sizing of the unit to the best and most practical location.